Manchester United defender Eric Bailly has been ruled out until the end of the year after knee surgery.

Manchester United manager Ole Gunnar Solskjaer has revealed that Bailly, who picked up a knee injury in a friendly win over Tottenham, will be out of action for four to five months.

Bailly suffered a similar injury to his right knee last season and has been out of action for a long time, and has now suffered another injury which will make to miss the rest of 2019.

Speaking to the press after United’s 1-0 win over Kristiansund in Oslo, Solskjaer said:

“Eric Bailly has had surgery and will be out for four to five months.

“I hope he comes back in time for Christmas.” 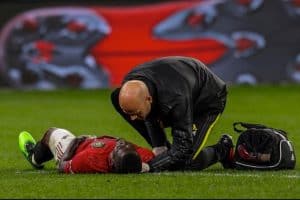 Manchester United, who have already been looking for a center-back, are now forced to find a central defender to fill Bailly’s place, and are still in talks to sign Leicester City’s Harry Maguire.

Manchester United want the 26-year-old England defender but they are not willing to meet Leicester City’s £ 90m asking price.

Harry Maguire has accused Leicester of putting a high price to prevent him from leaving the King Power Stadium this summer.