Henrikh Mkhitaryan faces missing the Europa League final due to a political dispute between his country Armenia and Azerbaijan.

The Gunners reached the Europa League final with a victory over Valencia in their semi-final second leg. 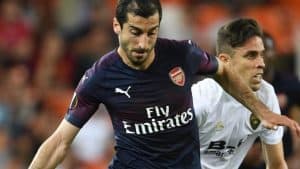 Mkhitaryan came in the game as a substitute but he’s now facing a headache and won’t be featured in the final of May 29 because he won’t get a visa from Azerbaijan.

The tournament will be played in Azerbaijan, and as a result of the war in Nagorno-Karabakh, there is a political dispute between the two countries for 30 years.

Arsenal will require a visa for all players to enter Azerbaijan, but there is no guarantee that the former Manchester United will get one.