Chelsea star Eden Hazard is already house hunting in Spain before moving to Real Madrid. The Belgium International is expected to leave Chelsea for a move to La Liga this summer.

And according to ESPN, Hazard wants to finalize as soon as possible his dream Real Madrid move.

The winger is so determined to join Real Madrid that he is already house hunting in Madrid and school options. 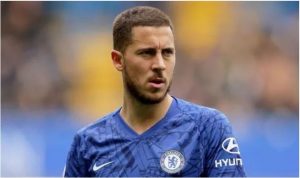 ESPN added, despite his willingness to go, Chelsea refuses to sell Hazard for below his value.

For the 28-year-old, who is out of contract next summer, the Blues are demanding around £100m.

While the Blues are resigned to lose Hazard this summer, they will only sell him if its in their best interest.

It should not be a problem for Real to agree personal terms with Hazard.

Chelsea discovered this week that their transfer ban will be upheld for the next two windows.

After FIFA’s decision to uphold their ban, the Blues released a statement.

It read: “Chelsea FC has today received the decision of the FIFA Appeal Committee.

“The club notes that the FIFA Appeal Committee has decided to partially uphold the appeal lodged by Chelsea FC against the decision of the FIFA Disciplinary Committee.

“However, the club is very disappointed that the transfer ban of two consecutive registration periods was not overturned.

“Chelsea FC categorically refutes the findings of the FIFA Appeal Committee. It acted in accordance with the relevant regulations and will appeal the decision to the Court of Arbitration for Sport (CAS).”