After a big commentary blunder at the Arsenal game with Valencia on Thursday, BT SPORT presenter Jake Humphrey was forced to apologize.

Arsenal entered the semi-final second leg of the Europa League leading 3-1 from last week’s home leg at the Emirates.

But Mestalla’s match took less than a minute before it started going wrong … for BT Sport. 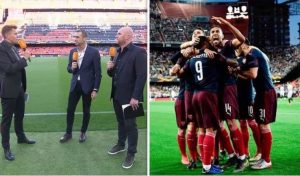 Commentator Ian Darke and Robbie Savage have been silenced as their sound has been cut off.

After a couple of seconds, Humphrey, who hosted the coverage, apologized to the viewers.

“Okay, apologies for the problems with the sound there,” Humphrey said.

“We’ll get back to Ian Darke and Robbie as soon as we can.”

There was then an awkward five minutes in which former Arsenal stars Martin Keown and John Hartson took turns to discuss what they saw on the pitch.

However, some supporters weren’t really best pleased when the commentary returned.

And former midfielder Robbie Savage, in particular, received criticism on social media on his commentary at the Arsenal game.

“Turn the commentary back off I beg you @btsport,” one fan tweeted.

Another wrote: “Preferred it when I couldn’t hear Robbie Savage, worst commentator there is, sort it out for next season please.”

“Just when you thought football couldn’t get any better this week, someone pulls out Robbie Savages mic,” another put.

Valencia had taken the lead through Kevin Gameiro within five minutes of the return of the commentary.

Shortly after, however, Arsenal grabbed a vital goal away through Pierre-Emerick Aubameyang.

It was the 27th goal of the Gabon International in all competitions this season.